In an exhausting debate that surprised no one, the two eldest UNIX administrators at Coral Reef Logistics once again used the majority of the monthly project meeting to continue their decades-long, passive-aggressive rivalry centered around the use of Emacs or VI. Ross Knight, Senior Solaris Administrator, wearing his well traveled “CDE is the window into the Sun” cardigan and trademark leather moccasin boots, interrupted fellow senior engineer Bill Walsh presentation by taking to the head of the room to proclaim, per his usual theatrics and little evidence, that “efficiency on all of the company UNIX systems would improve tenfold” by removing the “bloated, operating system of a monstrosity known as Emacs”, claiming that the mere existence of this “offensive, peeling foot skin of an application” slowed down the systems so much that “we’re absolutely hemorrhaging money”. As usual, the fiduciary embellishment got the attention of the CEO, who immediately stated that he “needs to know more”, ignoring the emphatic nods of “no” from the CFO. When DevOps engineer Peter Jones attempted to provide some sanity to the conversation by offering to pull up machine logs and monitoring data, he was quickly shut down by Knight, calling him a “fake admin who doesn’t even run real systems” and was told “You drive me up the wall, I ain’t no spider!”, which appeared to both confuse and amuse Jones, who was somewhat used to the outbursts of Knight at large, cross group meetings, pubs, and other public gatherings. As the grandstanding continued, Bill Walsh, Senior Sysadmin for AIX, HPUX, and the now defunct A/UX simply smiled, checked his Email, edited several fstab files, configured gated, and browsed a text based version of stallman.org while still plugged into the projector after presenting his curses based forecast for disk iops on the aging SCSI disks in his remaining legacy systems. This brazen display of terminal based contrarianism all but guaranteed that everyone could witness the vast capabilities of his mighty platform. 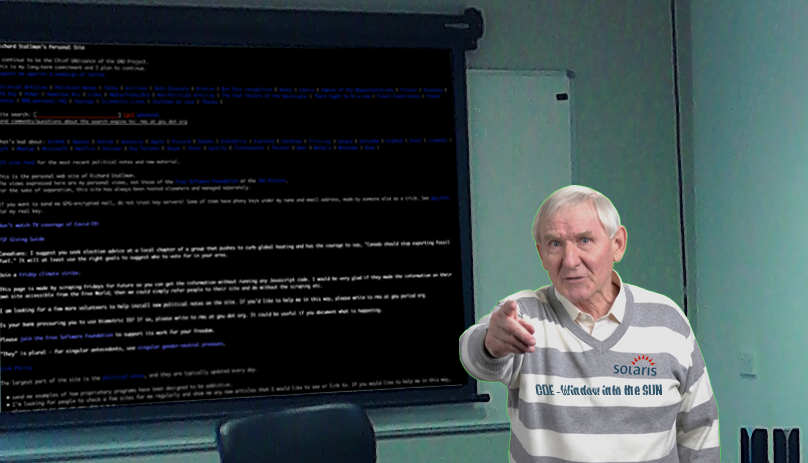 Once Knight had worked himself into such a frenzy that he was forced to sit down to have a drink of water to calm down, Bill simply stated “It’s called GNU Emacs.” went back to writing while loops to display current logged in users every 5 seconds. A clearly exasperated and defeated Knight simply groaned and went back to his office in the sub-basement to inventory his Sparc e450 servers and Sparcstation 2 desktop systems.

Once the meeting concluded, Junior Engineer John McKeering annoyingly muttered to fellow early and mid-career admins, “I don’t know why management lets these two basket cases keep us 40 minutes over time to bash out the difference between a piece of crap and a confusing puzzle when we all just use nano or Visual Studio Code on Linux hosts.”

When asked why they chose those platforms rather than taking a side in this war for souls, the jr. engineer responded “I’m too busy cleaning up after these old farts to give a damn about which text editor I use. Hell, all of their services are moving to three micro instances in AWS at the end of the year anyway.”